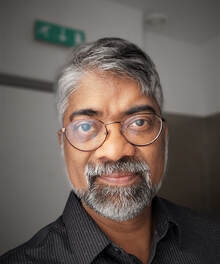 Ajit secured an MBBS from Trivandrum Medical College, Kerala State, India,  followed by residency in internal medicine at North Shore University Hospital, Cornell University, USA and Memorial Sloan-Kettering Cancer Center in New York. Subsequently, he obtained a masters in Public Health (MPH) from Saint Louis University (SLU) in 1998, became a Fellow of the American College of Physicians (FACP) in 1999, and received advanced training in medical informatics through the National Institutes of Health (NIH) in 2000. Ajit is currently American Board Certified in both Internal Medicine and Preventive Medicine (subspecialty Clinical Informatics).

In 2004, Ajit founded the Centre for Digital Health (CDH) at the Amrita Institute of Medical Sciences in Cochin, Kerala, India and served there as Director till October, 2008. He is currently Professor of Internal Medicine at Saint Louis University, and a staff physician at the St. Louis VA Medical Center, Missouri, USA. He is also Adjunct Professor of Medicine, University at Buffalo, New York since 2008 and serves as Research Scientist at the Centre for Disease Modeling, York University, Toronto, Canada; as well as visiting faculty at the Achutha Menon Centre for Health Science Studies at the Sree Chitra Tirunal Institute of Medical Scicences and Technology in Trivandrum, India. He has volunteered as a visiting professor in health informatics at the University of Addis Ababa, Ethiopia 2008 - 2010.

Ajit was part of the iHIND workgroup on health informatics reporting to Shri Sam Pitroda (advisor on innovation to the Prime Minister of India). He has over 35 international journal publications. He has authored a CD-ROM on cardiac auscultation that has been part of the curriculum for medical students at Yale University. He has written a book which is now in it's second edition “Clinical Research Methodology and Evidence-based Medicine: The Basics” with international contributors distributed simultaneously in India, Europe and Australia. He has served as Vice-President of the Indian Association of Medical Informatics and the Associate Editor of the Indian Journal of Medical Informatics.

In 2007, Ajit was nominated as a delegate to United Nations Action Team (AT6) dealing with space-based technologies as an aid to public health and he continues to be a part of the UN collaborative group. At present he is a member of the Expert Focal Group on Health under UN COPUOS, OOSA. He has been an invited expert on biomedical informatics for the Indian Council of Medical Research (ICMR) and has been principal investigator on a dengue project funded by the Department of Science and Technology, Government of India. His current interests are in improving public health through resource optimization, aided by the judicious use of cost-effective technology. He also has extensive experience and expertise in telehealth.

When time and logistics permit, Ajit is the lead vocalist and songwriter for the band Jus' Jamm based in Cochin which plays classic English rock, pop, country, blues and jazz.